Skip to content
As an Amazon Associate we earn from qualifying purchases. Learn more

Wondering which knife is better between a boning knife vs a fillet knife? This brief guide can help you find out.

Many people tend to think of a boning knife and fillet knife as synonymous with one another. However, nothing could be further from the truth.

While they may somewhat resemble each other, a boning knife and fillet knife have distinctive designs and functions.

My guide below can help you make a clear distinction between the two and, ultimately, decide which one better serves your needs.

What Is a Boning Knife?

A boning knife is a long knife fitted with a narrow blade with a sharp point. As its name suggests, it is typically used to debone (remove flesh from bones) meat and poultry. Its narrow, thin, and sharp-pointed blade allows precision boning and deep cuts.

Its blade also features an arched edge for easy single-pass cuts through the flesh. Furthermore, the blade features a stiff build to prevent it from snapping even when cutting through tough meats.

What Is a Boning Knife Mostly Used For?

A boning knife is mainly used for removing flesh from the bones of meat and poultry. The knife cuts through ligaments, connective tissues, and fats to prepare meat for cooking. After deboning it, you can also use a boning knife to cut the meat.

Can a Boning Knife Be Used as a Fillet Knife?

A boning knife can sometimes be used as a fillet knife. When shopping for a boning knife, you will encounter an overlapping all-purpose model you may use as a filet knife.

These boning knives tend to have a flexible blade that handles delicate fish without tearing or damaging the flesh. Nonetheless, even the best all-purpose boning knife will not do nearly as good of a job as a true fillet knife.

Top 3 Boning Knives You Should Check

Check out the most popular boning knives which you can easily use for slicing meat, chicken, beef, and other types of meat. These are;

If you want to enjoy the full functions of an all-purpose boning knife, the Dalstrong 6-inch Boning Knife is a great choice.

Made from premium American forged BD1N-Vx hyper steel fused with nitrogen, the knife offers incredible hardness and toughness. Yet, it maintains the flexibility needed to navigate delicate meat.

Furthermore, the blade undergoes a vacuum heat treatment and a traditional 3-step Honbazuke honing (12 degrees per side) to give you a razor-sharp knife that cuts through even the thickest and toughest meats.

The boning knife also integrates a LiquidMetal pattern on the blade, reducing drag and increasing efficiency. The knife drags through any meat thanks to this innovative pattern.

The Wusthof Classic 5-inch Boning Knife features a short-blade design, making it great for people with short hands and beginners in the craft.

The blade also integrates a proprietary precision edge technology for an even sharper edge. I also noticed that the knife does a great job nurturing your skill as a beginner.

Its contoured shape and the perfect balance offer ergonomic comfort so you can focus on improving your craft.

If you are looking for an all-around Japanese boning knife, the Shun Premier Gokujo 6-inch Boning Knife offers a premium quality option.

The Gokujo Japanese knife comes with the advantage of being multipurpose, functioning as a boning and filleting knife.

The knife features an ultra-sharp blade edge to make it strong enough to debone meat but delicate enough to remove bones from fish.

It also produces thin slices of meat and fish to make it ideal as a sushi knife. The knife is constructed with a double bevel flat ground blade for added durability and easy food release.

What Is a Fillet Knife?

A fillet knife is a kitchen knife fitted with a thin, sharp, and extremely flexible blade. The knife is built for deboning purposes, particularly removing bones from fish. Its thin and sharp blade also allows it to slice thin fish cuts.

What Is a Fillet Knife Mostly Used For?

Typically, a fillet knife is used for cutting fish and removing fish bones. Its flexible blade, as opposed to a stiff one, makes it perfect for tackling delicate fish. You will also find specially serrated fillet knives designed for bigger fish like tuna.

Can a Fillet Knife Be Used as a Boning Knife?

On the other hand, a boning knife is designed for meats and poultry, which need a stiffer and harder blade. So, using a fillet knife for such meat can risk snapping the blade of a fillet knife.

Top 3 Fillet Knives You Should Check

Here are some of the most popular fillet knives which you can use for filleting different types of fish from small to large. These are;

The Dalstrong 7-inch Fillet Knife integrates excellent craftsmanship and cutting-edge technology to ensure all your filleting tasks are successful.

The fillet knife is made using high-carbon German steel and a hand-polished edge at 16 to 18 degrees per side for razor sharpness and impressive edge retention.

The blade also features a slightly flexible design which allows the knife to glide along the contours of the bone smoothly.

However, the knife’s design doesn’t limit it to big fish alone. The blade integrates a tapered tip that can easily maneuver around smaller bones and cartilage.

The knife’s handle combines a triple-riveted design with a luxury black G10 Garolite laminated material for long-lasting durability and hygiene.

In fact, the use of the PEtec makes the blade 20% sharper and gives it twice the edge retention to glide different types of fish smoothly.

Its thin and flexible design complements the blade’s sharpness and edge retention. This blade design allows it to move smoothly along the backbone of the fish and effortlessly remove fish skin.

If you are on a budget and looking for a good quality fish fillet knife, the Rapala Fish N Fillet Knife is a great option. It also comes housed in a stylish tribal sheath and with a free sharpener to make it an excellent gift idea.

The ultra-long, thin, and flexible knife features a Swedish stainless steel blade for easy slicing and weather resistance. The full tang and tapered design give it good balance, control, and snap-free performance.

On the other hand, its reinforced varnished birch handle doesn’t only complement its look. It also provides a long-lasting and stable grip so you can comfortably work on both small and large fish. 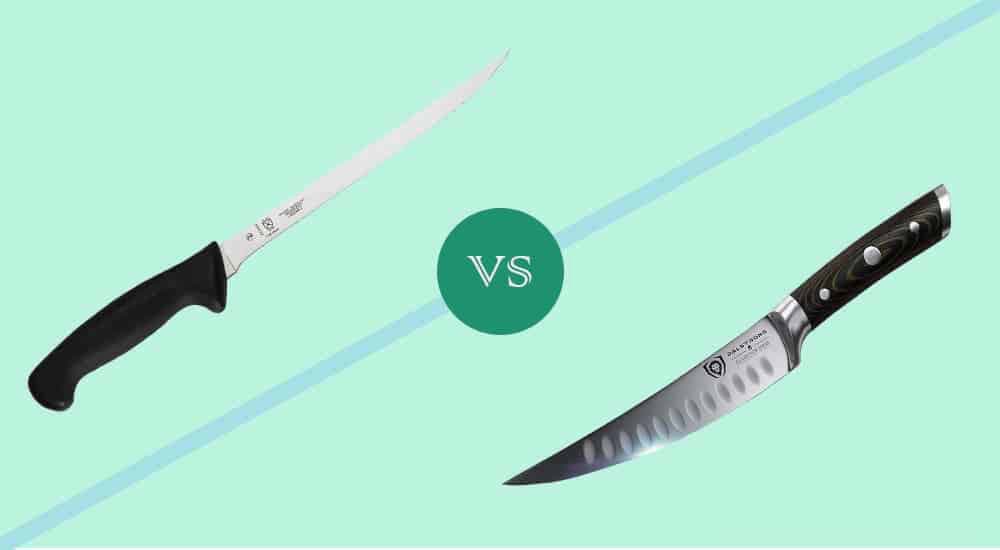 A boning knife and a fillet knife comes with several key differences. We’ve listed the most common differences to help you determine which knife is best for you.

Both boning and fillet knives have a thin blade design. However, boning knives tend to be a little thicker and stiffer than fillet knives. This allows them to tackle the much thicker flesh and bones of meat and poultry.

On the other hand, fillet knives are much thinner and more flexible, allowing them to perform delicate tasks.

Boning and fillet knives differ in blade lengths. Fillet knives can be found in 4 to 9-inch blades, depending on the fish to work on.

Shorter blades work for smaller fish, while longer ones are for large fish. Boning knives are fitted with 5 to 6-inch blades since they don’t require much precision for the less delicate meat and poultry.

A boning knife has a stiff blade which allows it to tackle the tougher and more demanding meat and poultry. A flexible blade on a boning knife would easily snap from the force used to handle the meat.

Fillet knives have more flexible blades, which allows better maneuverability. The flexibility of the blade prevents damaging and tearing the flesh of the fish.

Compared to other kitchen knives, a boning knife has a thin and narrow blade. However, compared to a fillet knife, it is much thicker.

The thickness allows it to handle the tougher meat and poultry, preventing it from snapping when in use. A fillet knife has an extremely thin and narrow blade which helps it handle delicate fish without tearing the flesh.

When it comes to the curvature, fillet knives have a curved blade while boning knives remain straight along the edge to the tip.

This sharp tip comes in handy for boning knives since it allows them to pierce through tough meat with ease. A filet knife has a pronounced upward curve and a curved tip. This blade design allows the knife to make long and consistent cuts.

Due to the difference in their design, each knife has a specialty task. A boning knife works great for removing bones from the flesh of meat and poultry.

It can also be used to cut the meat. A fillet knife is specially used to remove bones and skin from fish. You can also use the knife to cut and thinly slice the fish.

Boning Knife vs Fillet Knife – Which One Should You Buy?

The answer is pretty simple and obvious. There’s no better option than the other. Your choice of whether to get a boning or fillet knife entirely depends on how you intend to use them.

If you want a knife for deboning and cutting meat or poultry, you are better off with a boning knife. On the other hand, a fillet knife is handy for removing bones and skin from fish and cutting and thinly slicing it.

I have built kniveswow.com because as a home chef I know how important kitchen knives are. I use different kitchen knives every day and they always save my time. Here I share my thoughts, experience and knife maintenance tips with you. You can find more info about me.